November 10th — Los Angeles Mayor Garcetti announced today a new, industry-leading energy efficiency commitment for the city’s utility, with the goal informed by a new UCLA study addressing the economic and employment benefits of Los Angeles Department of Water and Power’s (LADWP’s) energy efficiency programs. Speaking at the press conference with the Mayor, UCLA Luskin Center Director J.R. DeShazo drew attention to the study, which finds that LADWP’s diverse portfolio of energy efficiency programs already creates 16 job-years per million dollars invested, and that a full implementation of these programs into 2020 could result in nearly 17,000 job-years in Los Angeles County.

The release of the UCLA Luskin Center study today came after LADWP commissioners recently approved a commitment to a 15% reduction in electricity consumption in Los Angeles through energy efficiency measures. David Jacot, Director of Energy Efficiency at DWP, recommended this goal using the jobs study as proof of the positive economic and employment benefits of energy efficiency programs.

“Just as water conservation is how we will get through our drought and control our water costs, energy conservation is how we will address climate change and keep our power bills low,” Mayor Garcetti said. “Investing in efficiency is three to four times cheaper than building new power plants and it takes pollution out of our air. The cheapest and cleanest way to ensure we have enough electricity to keep the lights on and power our economy is through energy efficiency.” 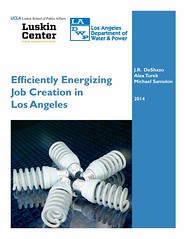 After analyzing LADWP’s diverse portfolio of 18 energy efficiency programs, UCLA researchers found that those programs create an average of 16 job-years per million dollars invested in Los Angeles County. The 18 programs researched in the UCLA study generally come in two varieties—direct install or incentive/rebate based–and deal with new construction as well as retrofits of existing building stock. Examples of these two types of offerings include programs such as the Small Business Direct Install, which provides small business customers actual energy and water-saving installations at no charge, while others such as the Customer Performance Program offer customers an array of rebates and incentives to encourage retrofits in lighting, air conditioning, refrigeration, and more.

The study found that the programs benefit all types of LADWP customers—industrial, commercial and residential, including low-income and senior citizen life line customer.  These programs also have the added benefit of stimulating growth among a wide set of skills and trades, from electrical, plumbing and construction to engineering and design, and the investment in these programs were found to have significant ripple effects in the local economy.

The authors of the study note that 16 job-years per million dollars invested is significantly higher than legacy energy production methods like coal and natural gas, as well as “typical” job-creators like construction, which create 6.9, 5.2 and 10.7 jobs respectively. It is even higher than other green industries like solar and smart grid, which create 13.7 and 12.5 jobs respectively. This research fills a big gap in accurate job creation numbers associated with specific types of energy efficiency programs, and will hopefully serve as a model that other utilities around the country can use.

Moving forward, the programs could create over a quarter billion dollars annually in economic output. Forecasting through 2020, the Luskin Center study finds that LADWP energy efficiency programs would create nearly 17,000 job-years in Los Angeles County as the programs are currently designed.