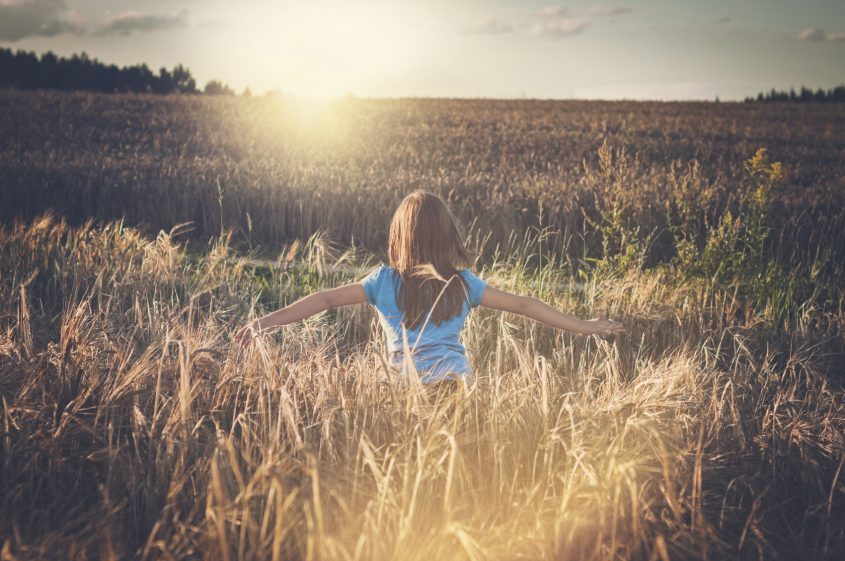 Sarah Godoy realized that she wanted to devote her life to fighting human trafficking when, during a trip to India, she overheard a pimp speaking to a 10-year-old girl. The pimp was questioning where another girl, a 5-year-old, had gone and when she would return to the brothel.

“Pedophilia was written all over this situation,” said Godoy, who was completing an international social work internship as a Social Welfare graduate student at theUCLA Luskin School of Public Affairs at the time of the trip. “I just thought, ‘I cannot see this.’ I had to intervene. That was an eye-opening experience for me.”

Upon returning to the U.S., Godoy interned at the Los Angeles-based, nonprofit organization Saving Innocence where she worked directly with domestic-born survivors of sex trafficking. The internship was during her second year in Luskin’s social work program.

And she has now authored a new study, “Shedding Light on Sex Trafficking: Research, Data and Technologies With the Greatest Impact,” a comprehensive literature review of sex trafficking in the United States, with components of global human trafficking as well.

Godoy conducted the research while working as the lead researcher and content manager for this report and an accompanying database in the Luskin Center for Innovation. The Luskin Center also created the website, humantraffickingdatabase.com, to provide users with this database containing pertinent literature and contact information for vetted service providers in the field. The project is part of the Luskin Center’s Digital Tech Initiative supported by Google.

Godoy included more than 135 pieces of relevant literature on sex trafficking, dating from 1999 to 2016, and conducted about 70 qualitative interviews. While she found some enlightening and often horrific statistics on the subject, what she didn’t find was equally disturbing.

“Weak methodologies in empirical evidence, and small data sets that urge readers to not republish as a national representative,” she said. “That’s what we found. We don’t really have a comprehensive, representative sample of what sex trafficking in the U.S. really is.”

While Godoy did find data for trafficking in California, Los Angeles County, Washington state and Florida — among other high-intensity areas — she did not find adequate national numbers. “We don’t really see nationally what’s happening because there’s no representative sample, so we must rely on proxy sources,” she said. “That’s a really big problem.

“More recently, in certain states, there has been legislation that says the child welfare system has to collect data on suspected at-risk youth and confirmed sex-trafficked youth who are system-involved within their jurisdictions, which is really wonderful,” Godoy added. “But that’s not across the nation, so again we lose the opportunity to gain a national representation of sex-trafficked youth in the child welfare system. We don’t have any federal legislation that would allow for a national repository to input data on sex-trafficked individuals and that is a detriment to the movement because of the transient nature of this population.”

Nevertheless, the international numbers compiled by Godoy are daunting. According to the study, human trafficking is the fastest-growing criminal enterprise in the world. It is estimated that there are 21 million women, men, girls, boys and transgender individuals trafficked worldwide — roughly equivalent to 3 out of every 1,000 people. Women and girls are identified as the most-trafficked populations, comprising 11.4 million of the labor- and sex-trafficked victims.

Adults account for 74 percent (15.4 million) of the victims and children younger than 18 account for 26 percent (5.5 million). According to data collected by the International Labour Organization, exploitation occurs in myriad settings but the most notable and widespread industries are domestic servitude, agriculture, construction, manufacturing and entertainment.

“I think something that’s important to highlight is the critical lens that we use when looking at the literature,” Godoy said. “We’re not just republishing U.S. statistics. That’s something that we see over and over again in the anti-sex trafficking, anti-human trafficking movement. For example, 100,000-300,000 children are at risk of being sex-trafficked in the U.S. each year. But, we look at it and say, ‘OK, this is also a weak methodology and we need more comprehensive data.’ Or, ‘the average age of entry is between 12 and 14,’ but again it’s from that same data set. So, we really need to be more critical when we’re republishing statistics. I think it shows that not enough resources are being put into adequately capturing data.”

Equally frustrating is any attempt to profile the traffickers — both those who exploit the individuals and those who purchase sexual activity.

“We have information on what traffickers look like, but in every single capacity, there are a lot of gaps,” Godoy said. “For example, for traffickers, there tends to be a lot of law enforcement bias: Who is being policed, what neighborhoods are being policed? We know that in a massage parlor, sex trafficking happens. We know that on the street, on the internet, in escort services, trafficking happens. But law enforcement tends to focus on the most physical crimes. So, they’re going to the streets and they’re looking online because there’s been a lot of talk about the internet as a platform to buy and sell children and buy and sell sex. So, again, there is a dearth of information in the statistics.”

Godoy’s report includes a series of recommendations to address the gaps, including those that exist regarding technologies that might help with the anti-trafficking efforts around the world.

Establishing a national database for FBI and local law enforcement to input, access and share pertinent information on human trafficking cases across jurisdictions.

Enhancing social media platforms to include a space for survivor leaders, more recent survivors and service providers to be used as an empowerment tool and healthy communication outlet.

Facilitating an app-based challenge for survivors to develop ways to prevent sex-trafficking with at-risk youth, intervene with victims, enhance after-care services and reduce recidivism for survivors through accessible technology.

And conducting further research on the interplay of technology with the following populations: at-risk youth in schools and the child welfare system; mental and physical health of human trafficked victims and survivors; child labor practices; labor trafficking of adults; and sex trafficking of adults.

Godoy was in Washington, D.C., on April 29 for an event sponsored by Polaris Project, the nation’s largest anti-human trafficking organization. Polaris oversees the national human trafficking resource center hotline, which provided a lot of the data for her study. She was one of three people presenting research on the subject.

As she weighed how to approach the presentation of this study, Godoy was firm about one aspect.

“I said to the design and layout expert who worked with me on this report that I don’t want the same dark imagery on the cover,” Godoy said. “I don’t want chains. I don’t want blood. I don’t want any of this negativity.

“I want it to be light, to show that there is a hope at the end of this and that these survivors are very resilient and deserving of more.”