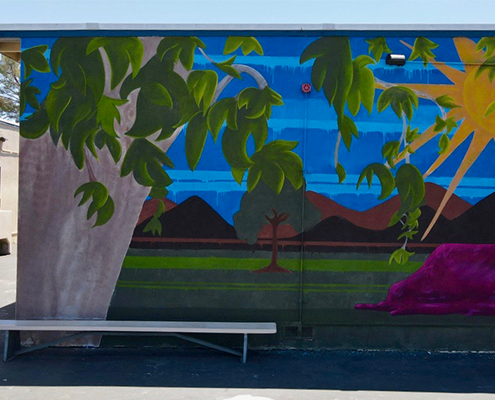 Surface-cooling paint was used to create “Beat the Heat,” a new mural at Fernangeles Elementary in Pacoima.

The research of Urban Planning Assistant Professor V. Kelly Turner has helped to create a colorful gift for the children of Fernangeles Elementary School. A new mural melding art with science, and reflecting inspiration from youth in the community, was installed on the school’s Sun Valley campus this spring. Called “Beat the Heat,” the mural depicts a park with shade trees and a large purple paleta melting under a bright sun — all painted with a solar reflective coating that reduces surface temperatures up to 30%.

Turner conducts research into the effectiveness of this coating as a climate change intervention that cities can use to combat the “urban heat island effect.” At Fernangeles Elementary, schoolchildren watched as Turner “took the temperature of the building” with a thermal camera that demonstrated the effect of the cooling paint. Turner then used the camera to measure the heat signatures of walls, the ground and a picnic table on campus, giving the students a real-world lesson in climate science.

Artist Kristy Sandoval designed and painted the mural based on ideas conceived by youth from the environmental justice nonprofit Pacoima Beautiful. Mural collaborators include Dora Frietze-Armenta, Yesenia Cruz, Nicole Martinez, Diego Ortiz and Veronica Padilla of Pacoima Beautiful; Fernangeles Elementary Assistant Principal Carolina Gonzales; art historian Lizy Dastin; and Creative Paving Solutions, which manufactured the solar-reflective paint. The mural is the second spearheaded by Turner as part of a “green intervention” aimed at starting a conversation about climate change. The first, a massive rendering of the Greek god Zeus, was installed in South Los Angeles in 2019.

Green Together Collaborative Launching Projects in Pacoima
Scroll to top