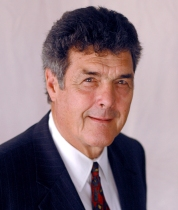 The sample consisted
of 103 self-selectedfirms representing the six primary business sectors in the
Mexican economy.  Because the Manufacturing sector is significantly
overrepresented in the sample and because of its importance in addressing
issues of environmental sustainability, when appropriate, specific results for
this sector are reported and contrasted to the overall sample.

Our results suggest
that Mexican companies are very active in the various areas of business where
environmental sustainability is relevant. Not surprisingly, however, the
Mexican companies are seen to be at an early stage of development along the
sustainability “learning curve”. The vast majority of these firms see adopting
environmental sustainability practices as being profitable and think this will
be even more important in the future. BIOGRAPHYDennis
J. Aigner
is Emeritus Professor of Management & Economics in the Paul Merage School
of Business at the University
of California, Irvine
(UCI). From 2000-05, he was Dean of
the Bren School of Environmental Science & Management at the University of California, Santa Barbara. From 1988-97
he was Dean of the Graduate School of Management at UCI. Before that, he was
Professor of Economics and Chairman of the Department of Economics at the
University of Southern California (USC) in Los Angeles.
He received his BS and Ph.D. degrees in Agricultural Economics from the University of California,
Berkeley and
holds an MA in Applied Statistics from that same institution.  He was on the teaching faculties at the University of Illinois and the University of
Wisconsin-Madison prior to his appointment at USC in 1976.

Aigner’s publication record includes
several books and numerous articles on statistical and econometric methodology,
and applied economics.  He was founding
editor of the Journal of Econometrics
and one of its co-editors for 20 years. His research interests include
corporate environmental management, international trade, and state and local
economic issues.

Aigner’s current research focuses on empirical and
theoretical work relating to the linkage between corporate environmental
performance and financial performance. For several years he organized a research
workshop on behalf of the EPA on “Capital Markets and Environmental
Performance” that explored the topic with academic researchers, practitioners,
and members of the corporate sector. From 2003-09 he served as a member of the
National Advisory Committee to the U.S. EPA Administrator on the environmental
aspects of NAFTA. Most recently, he completed a survey of the top 400 Mexican
firms with regard to their sustainability practices, funded by a UC-MEXUS
grant.

He presently holds the position of Distinguished Visiting
Professor at the EGADE Business School of the Monterrey Institute of Technology
in Mexico.