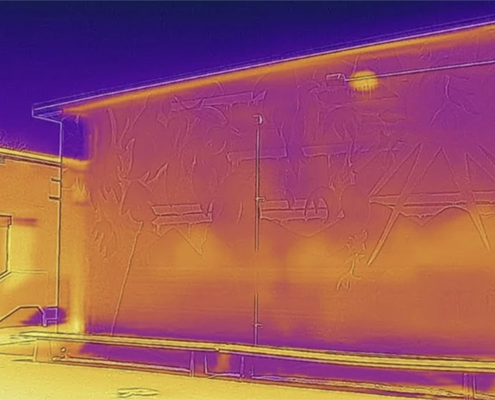 Thermal color image of Kristy Sandoval’s “Beat the Heat” mural at Fernangeles Elementary School in Pacoima, in Los Angeles. The mural uses solar reflective paint to lower the temperature of the wall from over 100 degrees F to as low as 86 degrees F. Purple indicates cooler temperatures whereas red/yellow signals hotter temperatures, such as the asphalt, which registered 136 degrees F. Photo credit: Ariane Middel, ASU.

As temperatures are heating up this summer, V. Kelly Turner, associate director of the Luskin Center for Innovation, is advocating for creative solutions to keep our cities cool.

In a Next City op-ed, Turner, who is also an assistant professor of urban planning, wrote about the need for federal regulations to address extreme heat in urban areas.

The average temperature in a city with over one million people can be as much as 5.4 degrees Fahrenheit warmer than the surrounding countryside because of the urban heat island effect. Sometimes the difference can be up to 22 degrees.

“Cities are hotter because of how we build them, and they can be cooler if we build them differently,” Turner explained.

Heat waves have become more frequent and severe, and Turner noted that they disproportionately affect low-income communities and communities of color and reduce educational achievement for Black and Hispanic students.

Turner proposed a Cool Communities Act that would regulate the production of urban heat by setting standards for building materials and rules for land use. For example, cool roofs that reflect sunlight instead of absorbing it can be up to 50 degrees cooler than standard roofs.

Keeping communities cooler would reduce rates of heat-related illness and death, limit smog formation, and help students learn. It would also save energy and reduce greenhouse gas emissions that contribute to climate change.

“We may not be able to change the weather,” Turner wrote. “But we can turn down the heat through sensible cool communities standards.”