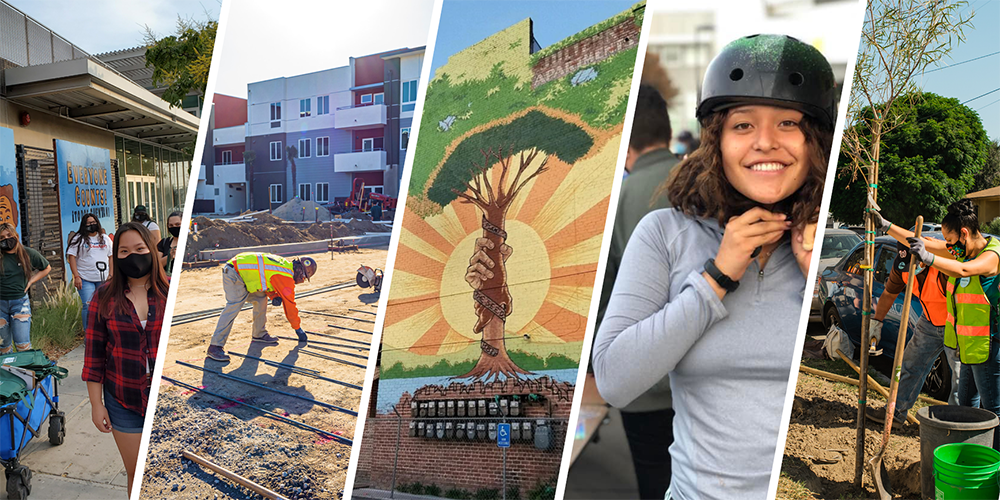 An area of Los Angeles particularly shaped by racial injustices has a new distinction: Watts is leading on local solutions to the climate crisis.

Among the projects this year, 300 residents received energy efficiency upgrades, like smart thermostats and LED lighting, to cut down on greenhouse gas emissions and reduce their energy bills. Volunteers delivered 261 thousand pounds of fresh food to nearly 10 thousand residents by rescuing produce that would have otherwise ended up in landfills — it’s reducing both waste and food insecurity. The community also started planting 2,250 trees, which will cool down streets and sequester carbon.

New reports from the UCLA Luskin Center for Innovation document the progress of TCC-supported action in five communities across California: Fresno, Ontario, Stockton, and the Watts and Northeast San Fernando Valley neighborhoods of Los Angeles. These annual reports are part of the ongoing evaluation that UCLA is conducting in collaboration with TCC grantees.

“Learning from these pilots is important,” said Jason Karpman, project director at the UCLA Luskin Center for Innovation. “As one of the most comprehensive community-scale climate programs in the world, lessons from TCC can support equitable climate action elsewhere.”

Policymakers are considering how to bring elements of the TCC model to more under-served communities. For example, President Biden’s signature environmental justice initiative commits 40 percent of federal clean energy and climate investments to disadvantaged communities, and a previous report from the UCLA Luskin Center for Innovation identified the TCC program as a model for how to achieve the goals of that initiative.

“The urgency of the climate crisis demands bold action,” said Emi Wang of the Greenlining Institute, a nonprofit organization deeply involved with TCC efforts in Stockton and beyond. “We need to bring communities together to define their own goals and solutions to fight climate change, reduce pollution and address local economic needs. Thanks to AB 2722, the bill co-sponsored by the Greenlining Institute that established the TCC program in 2016, we now have an innovative model program right in our backyards.”

Each TCC community selects and implements over a dozen projects to reduce pollution, strengthen the local economy and improve public health. Take the Vista Verde affordable housing community, a recently-completed project in Ontario. Vista Verde is all-electric and net-zero energy, which cuts down on pollution while minimizing energy bills for the 100 families that have moved in. And since the apartments are located centrally near transit lines, residents have easy access to green and affordable transportation options.

These projects are improving the quality of life for residents in profound ways.

“I used to have to choose between groceries and rent,” said Norma de la Cruz, a tenant at Vista Verde. “Now we can live more comfortably.”

Typically, these three project examples would require separate grants from at least three separate government agencies. But TCC provides an integrated, one-stop shop to address community priorities around housing, transportation, urban greening,  jobs, and education, which so often have interconnected implications for the health of people locally and the planet globally.

The most transformative element of TCC may also be its most foundational: the community engagement and collaborative processes that anchor each neighborhood’s efforts. Plans for economic development and displacement-avoidance, for instance, are developed and implemented in a way that further community partnerships, utilize local knowledge and build capacity. In this way, empowering members of historically under-served communities can catalyze change for the long-term.

Most major U.S. cities are underprepared for rising temperatures
Scroll to top