Through research and collaborations with stakeholders, the Luskin Center for Innovation (LCI) seeks to advance climate equity by informing policies, plans, and processes that empower and uplift communities, particularly those that are low-income, to bring home the benefits of climate mitigation and resiliency building. Thus far, this work has focused in California, with the ability to transfer lessons learned. Example projects follow. 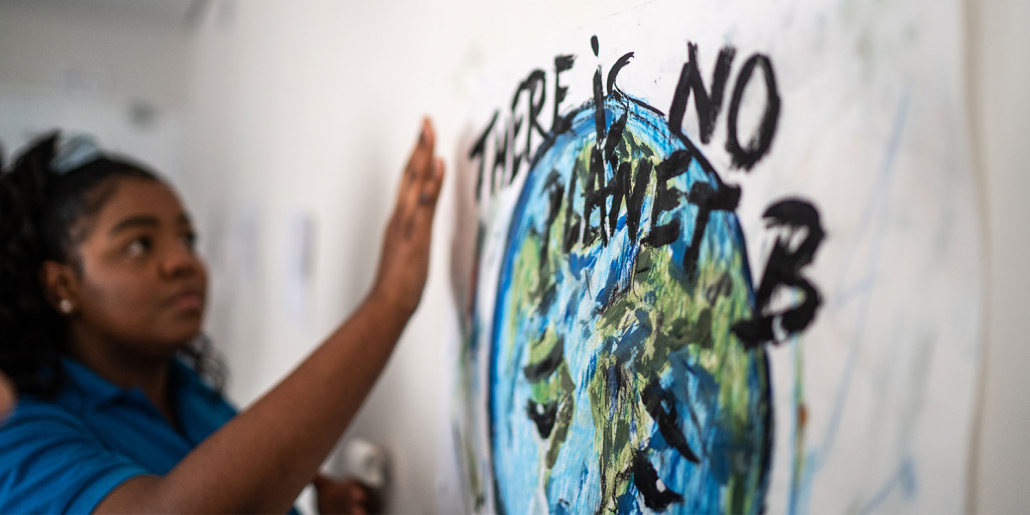 President Biden’s Justice40 Initiative aims to “address the disproportionate health, environmental, economic and climate impacts on disadvantaged communities.” This report provides a framework that federal officials could use to maximize Justice40’s impact. Drawing from analysis of state-level climate programs seeking to address environmental justice, the authors identify key areas of focus for the initiative: investing to provide resources for the people who need them most, empowering communities to make local policy and investment decisions, and holding government agencies and contractors accountable for furthering environmental justice goals.

emPOWER is a Los Angeles county-wide campaign in which community-based organizations connect low-income residents to a suite of clean energy, transportation, and financial assistance programs. We evaluated the first year of the pilot program coordinated by Liberty Hill and led locally by eight community-based organizations. Results showed that the campaign was highly successful in reaching the most impoverished and environmentally disadvantaged communities, especially compared to outreach by individual existing government and utility programs. Baseline estimates of “realizable” benefits that could be accessed by emPOWER participants suggest that if even one-third of eligible individuals sign up for a small subset of ongoing bill assistance programs and remain enrolled for five years, $1.2 million in benefits could be gained by these low-income residents. The effectiveness of the emPOWER campaign as documented by this evaluation has contributed to ongoing discussions around expanding this campaign model to other counties in Southern California, and beyond.

LCI assessed the financial impacts on disadvantaged communities of California’s carbon Cap-and-Trade Program, which places the world’s first economy-wide cap on greenhouse gas (GHGs) emissions and establishes market mechanisms to price carbon allowances. The regulated entities are large emitters of GHGs, including electric utilities, natural gas utilities, and fuel distributors. LCI researchers analyzed Cap-and-Trade compliance costs that result from the regulated entities’ purchase of carbon allowances. The costs of these allowances create price signals that communicate to consumers the amount of GHG emissions associated with electricity, natural gas, and gasoline consumption. While allowing price signals to encourage lower GHG consumption choices, policymakers also want to ensure that the cost burden does not fall disproportionately on low-income Californians. The state has put in place many mitigation strategies that LCI researchers found to financially protect low-income households, in most cases, in the communities that the study analyzed.

See LCI’s Climate Mitigation page for other examples of how LCI scholars are expanding knowledge about climate equity issues in mitigation policy.

Guidance for an Equitable and Effective Extreme Heat Strategy in California

While California is planning for rising temperatures with its new Extreme Heat Action Plan, the state has not historically treated extreme heat as a social equity and public health crisis — a crisis that requires targeted and robustly funded action to save lives. Our policy brief series can help inform upcoming policy and budget decisions. The first brief summarizes five recommendations for the state to advance an equitable, evidence-based approach to heat mitigation and adaptation. Given that we spend most of our time at home, the second brief spotlights three recommended actions to protect Californians where we live.

Where will temperatures rise the most in the coming decades, and who will be most impacted? The Healthy Places Index (HPI): Extreme Heat Edition is an interactive tool designed to help the state ramp up its efforts to prepare for rising temperatures — visualizing where and who will be most affected in the coming decades. This mapping tool was developed through a joint partnership between the LCI and Public Health Alliance of Southern California.

Heat is a deadly threat in California, but efforts to protect people from rising temperatures are patchwork, at best. Funded by the California Strategic Growth Council, this report examines the network of programs and funding opportunities that address heat in the state — most of which do not explicitly or intentionally target heat risk — and identifies the missing pieces that can help protect residents from extreme heat. The report focuses on addressing extreme heat exposure in seven ‘priority settings’ — places where exposure to heat can be especially consequential.

A nearly $1.5 million grant from the Strategic Growth Council to LCI supports multiple studies of heat-related climate impacts, the factors that make populations and communities vulnerable, and opportunities to build resilience. Climate change could exacerbate inequalities, and this project will result in tools to help government agencies target responses and empower communities.

See LCI’s Climate Adaptation and Resilience page for other examples of how LCI scholars are expanding knowledge and capacity to advance equitable climate adaptation planning.

The Transformative Climate Communities Program (TCC) may be the most innovative, comprehensive, and equitable experiment in community-scale climate action, ever. State funding via California Climate Investments, along with leveraged funding, supports community-led development and infrastructure projects in clean transportation, affordable housing, renewable energy, energy efficiency, urban greening and more. TCC is a high-profile program dedicated to empowering communities most burdened by poverty and pollution to choose their community vision, strategies, and projects to enact transformational change – all with data-driven milestones and measurable outcomes.

LCI is documenting the progress of TCC-supported action in five communities across California: Fresno, Ontario, Stockton, and the Watts and Northeast San Fernando Valley neighborhoods of Los Angeles. The evaluation UCLA is conducting in collaboration with TCC grantees illustrates that TCC projects are already benefiting communities and residents profoundly, bringing savings on energy and rent, greener streets, job training, and more. As policymakers look to scale up local climate programs, they can gain valuable insight from TCC-funded climate resilience solutions.

State proceeds from California’s carbon Cap-and-Trade Program flow into the Greenhouse Gas Reduction Fund (GGRF) and then are appropriated by the Legislature as California Climate Investments. This LCI report provides a guide to California Climate Investments, focusing on those programs most targeted to benefit disadvantaged communities. The report provides an overview of each program and then analyzes program investments based on recent funding levels (inputs) before and after the GGRF. Additionally, the authors establish a framework to systematically assess program inputs, outputs, outcomes, and impacts. They also make recommendations to enhance benefits from the investments.

Author: Colleen Callahan (see report for list of the many other contributors)

Senate Bill 535 (de León), signed into law in 2012, requires that 25 percent of proceeds in the GGRF go to projects (now referred to as California Climate Investments) that provide benefits to disadvantaged communities in California. UCLA organized a working summit which produced a report that proposes a framework for planning and implementing California Climate Investments to help maximize benefits in communities affected by pollution and poverty.