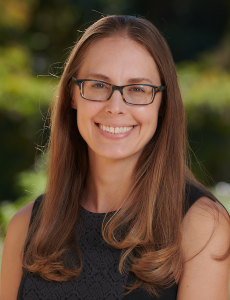 Colleen Callahan (she/her) is co-executive director of the Luskin Center for Innovation (LCI). She previously served as founding deputy director for 12 years, playing an integral part in building the research center from the ground up. Collaborating with colleagues and civic partners, she helps ensure that LCI’s research shapes evidence-based environmental policy and other solutions. She spends much of her time strategizing, partnering, amplifying LCI’s work, and leading or supporting research projects, communications, events, and more.

Colleen has launched several initiatives that connect researchers with civic partners, including LCI’s Environmental Justice Field Fellowship Program. She has also facilitated several new research endeavors, particularly in the Climate Program. Through collaborative processes with civic partners, she helped guide the state’s framework for California Climate Investments in disadvantaged communities and then facilitated evaluations of some of the state’s most equity-centered climate action programs. In a current project with movement leaders, she is applying learnings from California and other state experiences to advise the federal government in their climate and clean energy investments to advance goals of racial, environmental and economic justice.

She has about 20 years of experience in social entrepreneurship, environmental policy, and urban planning. Previously, she directed UCLA’s Leaders in Sustainability (LiS) Graduate Certificate Program, which benefits about 100 graduate students annually from 20 plus disciplines across campus. Before coming to UCLA, she co-founded the Los Angeles Sustainability Collaborative, which has since folded into LiS, and established the L.A. office of the American Lung Association, later serving as their local lead on clean air policy campaigns.

In the News (Recent Examples)

California leads the way in zero-emission transportation, but there are still challenges to overcome (ABC7 News)

All this money pouring into infrastructure should be a boon for high-speed rail, right? Not so fast. (Washington Post)

Environmental racism is a health issue – How experts are addressing it
(Health.com)

The push for clean energy is powering up
(Capital Weekly)