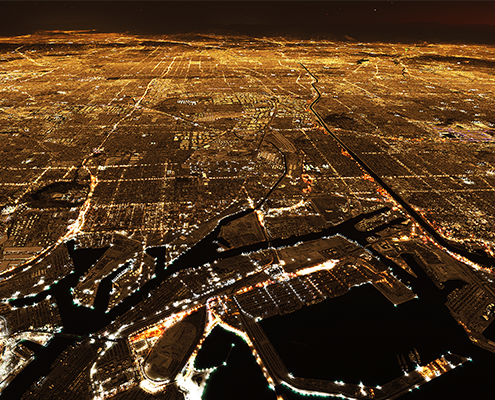 While California is making progress on its ambitious goal to power the state with zero-emission energy by 2045, not all regions are transitioning at the same pace.

A new report by the UCLA Luskin Center for Innovation paints a picture of Southern California’s energy landscape, highlighting which cities are powered by clean electricity, which residents consume the most energy and emit the most greenhouse gases, and who is adopting technology like rooftop solar panels and electric vehicles.

The researchers analyzed electricity usage based on income, disadvantaged community status, and vulnerability to extreme temperatures for about 14 million residents in Los Angeles, Orange, Santa Barbara, and Ventura Counties.

The study, supported by the Los Angeles Cleantech Incubator and the California Energy Commission, found several differences across the region.

Neighborhoods that will experience the most extreme heat also tend to run on less clean energy.

Areas like the inland L.A. Valley and northern Orange County are expected to experience the most days above 90 degrees Fahrenheit in the next few decades. As temperatures rise, residents will need to turn up their air conditioners, many of which are currently powered by polluting energy sources. This could result in both rising utility bills and carbon emissions.

The higher the income of residents, the more likely they were to both uptake clean energy programs and live in an area with greater clean energy supply. However, wealthier residents also used more energy and emitted larger amounts of greenhouse gases. This underscores the importance of reducing electricity consumption in addition to increasing the supply of carbon-free energy to slow the impacts of climate change.

It also illustrates the need to target investments in clean energy programs in vulnerable communities, especially those with lower incomes, those that are state-designated disadvantaged communities, and those expected to experience more extreme heat.

“As clean energy technologies like electric vehicles are becoming more widespread, we need to ensure that the benefits — reducing local impacts of climate change and saving money on electricity bills — are equitably distributed,” explains Kelly Trumbull, researcher at the UCLA Luskin Center for Innovation.

“We’ve made advancements in the energy sector, but we’re still seeing inequalities,” said Mayte Sanchez, director of energy at the Los Angeles Cleantech Incubator. “We need to make sure that everyone is included in a green economy.”

For more guidance and tools to advance equity through energy and transportation programs, see other UCLA Luskin Center for Innovation resources.