Insights from an environmental pioneer

Insights From an Environmental Pioneer 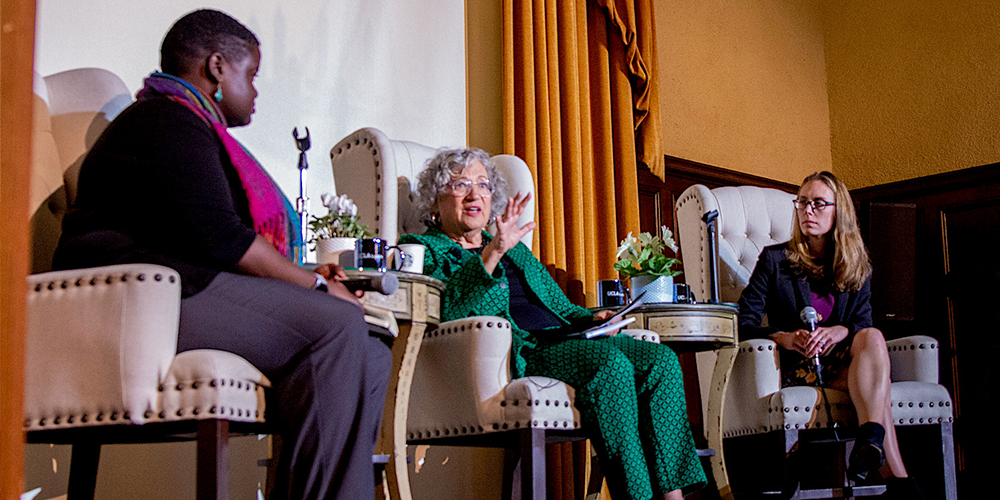 What comes to mind for Mary Nichols after 50 years as a leader of California’s environmental policy?

“As a lawyer, what I know is how to take laws … and actually make them do something for people,” she said. “If there’s a principle that I have tried to conduct my work by, it is that you don’t get appointed to one of these government jobs to fill the seat. You get appointed to actually do something with the job.”

After four terms as California Air Resources Board chair, Nichols told an in-person crowd of about 75 people and others watching online during the April 4 UCLA Luskin Lecture that getting things done requires dedication, persistence and, perhaps most importantly, good science.

Nichols pointed to her experience in leading the agency to set gasoline efficiency and anti-pollution standards in the automotive area.

“We had our own engineers who knew just as well as the people inside the car companies that we were regulating what could be made available and what could be made affordable — like the catalytic converter — if you could just get the companies over their reluctance to change and overcome their constant desire to hold onto what they have until they can figure out how to make a profit on it.”

If policymakers know what needs to be done and have the data to support it, Nichols said, “then you have a pretty good chance of bringing people along with you and moving forward.”

Nichols is an attorney who began working as an environmental regulator in response to the federal Clean Air Act of 1970. She first joined the state’s top environmental agency in 1975 and served as chair between 1979 and 1983, then from 1999 to 2003, and again from 2007 to 2020. She is also a distinguished counsel for the Emmett Institute on Climate Change and the Environment at UCLA Law and has associations with the UCLA Institute of the Environment and Sustainability and with the UCLA Luskin Center for Innovation. 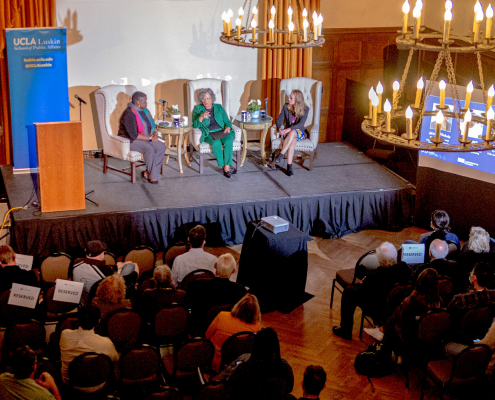 The Luskin Lecture welcomed guests back to campus after two years of remote gatherings. Photo by Les Dunseith 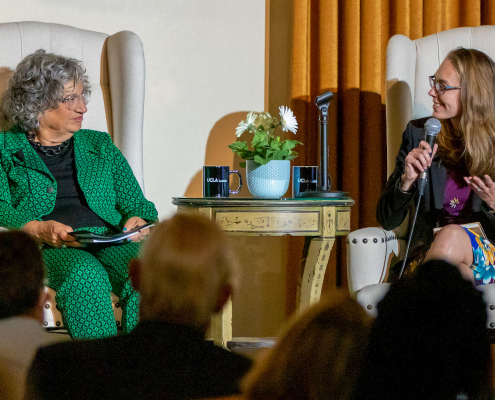 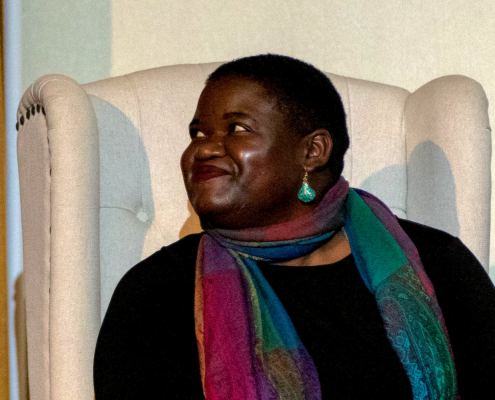 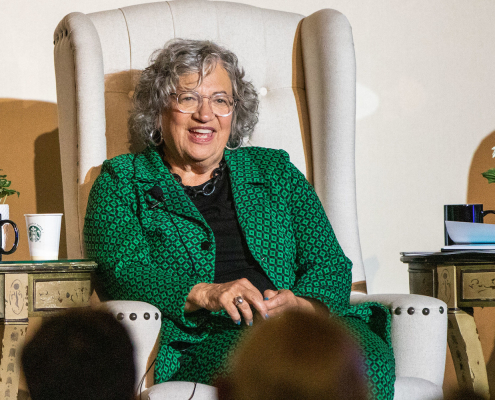 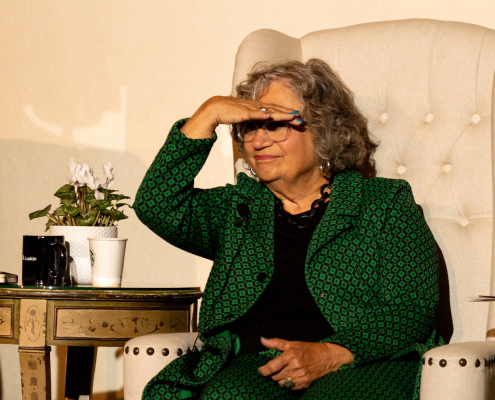 In his introductory remarks, Dean Gary Segura of the Luskin School of Public Affairs said, “If you’re interested in the environment and you’re a longtime resident of California, the first name that would come to your mind in shaping the environmental policy of this state is Mary Nichols.”

Nichols’ appearance was the first Meyer and Renee Luskin Lecture Series event to occur in person in more than two years because of the COVID-19 pandemic. It took place in the Charles E. Young Grand Salon at Kerckhoff Hall on the UCLA campus.

Nichols was joined in a discussion about the past and future of clean transportation by Tierra Bills, assistant professor of public policy and civil and environmental engineering at UCLA, and Colleen Callahan MA UP ’10, co-executive director of the UCLA Luskin Center for Innovation.

They touched on issues that included air pollution, the future of clean energy and how to overcome resistance from businesses, government officials and the public to new, cleaner technology, including fostering wider acceptance of electric cars.

“We start with the fact that electric vehicles are expensive. There’s no question that they are more expensive than gasoline cars,” Nichols acknowledged. “And new gasoline-powered cars are expensive to begin with.”

She noted that electric vehicles are a growing segment of the used car market, but the reality is that many people are never going to purchase an electric car unless manufacturers — many of which see electric vehicles as their future — receive government incentives to bring costs down.

“Otherwise, we’ll be looking at nothing but a luxury market,” Nichols said.

In California, a related need is starting to get more attention — making charging stations readily available.

“If people find a way to afford to buy an electric vehicle, but they don’t have a place to charge it, then it’s not doing any good,” Nichols said. “We still have a long way to go in terms of … providing charging in public places and charging at workplaces.”

Nichols said greater recognition of the need for equity now exists among decision-makers, but challenges remain. “I think there are ways of attacking the problem,” she said, “but it is going to require much bigger thinking than most of what has been going on up to now.”

Nichols joked, “Just saying that the Air Resources Board thinks you should do something isn’t going to be a winning argument, right?”

Regulation and innovation are important, she said, but federal and state agencies also must look to build partnerships at the municipal level, enlisting assistance from local businesses and community-based organizations.

She recalled an instance in which funding became available to advance air pollution goals by replacing old buses. To their surprise, government officials soon found themselves working not so much with school districts and large transit agencies as with religious organizations.

“That’s who had old buses that they wanted to turn in and get new, clean buses so they could take kids on field trips,” Nichols recalled. “So, sometimes it requires a new way of delivering services.”

Callahan spoke about the increasing alarm among scientists that more must be done — and soon — if humankind is going to persevere in the face of climate change. How does one remain grounded and optimistic when faced with so many dire predictions?

Gesturing toward the crowd of environmental advocates, faculty, staff and students, Nichols continued.

“You get to know some of the people who, hopefully, are not just going to do what I did, but who are going to do it more and better.”

The Meyer and Renee Luskin Lecture Series enhances public discourse on topics relevant to the betterment of society, bringing together scholars as well as national and local leaders to address society’s most pressing problems. The event with Mary Nichols was co-hosted by the UCLA Luskin Center for Innovation, along with several campus partners: the UCLA Center for Healthy Climate Solutions, UCLA Center for Impact@Anderson, UCLA Emmett Institute on Climate Change and the Environment, UCLA Institute of the Environment and Sustainability, UCLA Institute of Transportation Studies, UCLA Samueli Department of Civil and Environmental Engineering, and the UCLA Sustainable LA Grand Challenge.

Watch the lecture on Vimeo.

Uncovering the perils of plastics
Scroll to top