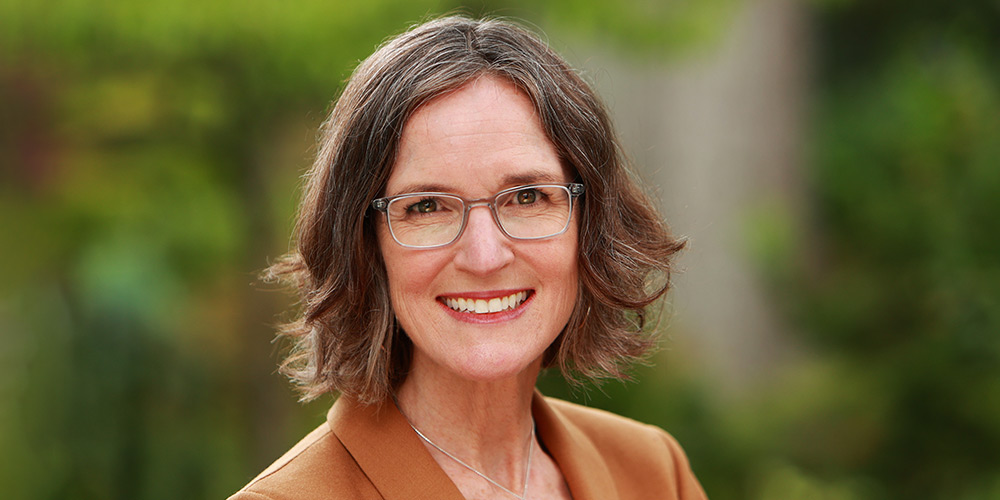 Megan Mullin brings a record of on-the-ground policy impact to her new position as Endowed Professor of Innovation and Sustainability. Photo by Laura Wessell

Megan Mullin — an award-winning scholar of American political institutions and behavior, focusing on environmental politics — has been appointed to endowed positions within the UCLA Luskin School of Public Affairs.

In January, she will join the faculty of UCLA Public Policy as the Meyer and Renee Luskin Endowed Professor of Innovation and Sustainability. Mullin, currently a professor at Duke University’s Nicholas School of the Environment, has also been appointed the new faculty director of the Luskin Center for Innovation. Meyer and Renee Luskin recently endowed both the professorship and faculty director roles.

“Megan Mullin is a unique scholar whose work, at the intersection of environmental protection and the policy process, is perfectly suited to take the Center for Innovation to the next level,” said Gary Segura, dean of the Luskin School.

Mullin’s appointment comes at a time when unprecedented heat, drought and wildfires underscore urgent climate change challenges facing California and the country. The path to solutions is steeped in politics — from the level of local communities to the nation’s capital.

“I explore environmental policies that are just, effective and environmentally sustainable. Governance research can help ensure that policies are successfully implemented,” Mullin said.

Mullin’s areas of research include the governance and finance of urban water services, public opinion about climate change and the local politics of climate adaptation.

“Megan understands the factors necessary for action – from the role of public opinion and elections, to how environmental policy is affected by the complex layers of American federalism,” said Public Policy chair Mark A. Peterson. “My colleagues and I are thrilled that Megan will be joining our department as she also takes on the faculty director role at the Luskin Center for Innovation.”

“I’m delighted to help advance the Luskins’ vision of bringing UCLA’s expertise to confront our biggest public challenges. The center is bringing that vision to life by collaborating with decision-makers and community members to make on-the-ground impact in environmental policy,” Mullin said. “I look forward to joining that important work and furthering it.”

Mullin brings a breadth of qualifications for the position. In addition to her role at the Nicholas School, she also holds appointments at Duke’s Department of Political Science and Sanford School of Public Policy. Mullin is a 2020 Andrew Carnegie Fellow and serves on the leadership team for C-CoAST, a National Science Foundation-funded interdisciplinary initiative to study human-natural interactions in coastal systems. Recipient of five awards from the American Political Science Association, she earned a Ph.D. in political science from UC Berkeley.

“Megan is one of the nation’s most esteemed social scientists addressing the local politics of inequitable access to clean water and climate adaptation,” said Gregory Pierce, co-director of the Luskin Center for Innovation. “She will increase our local and national impact through her scholarly and community-engaged understanding of how to affect change at a critical time.”

In a recent article in Nature, Mullin explained why Americans have been slow to respond to the climate crisis and argued that “it is time to bring political knowledge to bear on decisions about protecting people from its consequences.”

Mullin envisions expanding upon the center’s work with a governance lens. Her research aims to understand political feasibility. Specifically, Mullin wants to increase the Luskin Center’s influence on environmental policies in California and more recent work on the national stage.

“There are so many lessons learned from California’s environmental innovations that can be applied elsewhere,” Mullin said. “That’s not just about helping California learn, but also understanding what’s transportable to different contexts.”

“She will bring an integrated set of research skills, teaching experience and policy impact that’s a fantastic fit,” said Peterson, a professor of public policy, political science and law at UCLA.

Mullin plans to start teaching courses in the upcoming spring quarter and said she believes that students are an important bridge for research and practice.

“And yes, I really love teaching and mentoring students,” Mullin said. “That’s an excitement about Luskin – the extent to which the center is integrating students into so many different parts of its activities.”

She also welcomes the Luskin School’s focus on the intersection of policy, planning and social welfare. “That intersection is a powerful combination to understand environmental policy at the local level,” Mullin said. “For instance, confronting climate change also requires thinking about housing and social services. And considering how communities have enormously different risks and capacities. This is a unique opportunity to bring all of those pieces together.”

Mullin is the recipient of a Duke University award for excellence in graduate student mentoring. She teaches and advises students in the areas of environmental politics, local politics and water governance in the United States.

“So many of my former students are now out working in environmental professions, and that’s how I understand what challenges they’re confronting. That informs my research agenda. It’s an ongoing conversation,” said Mullin, whose research has been funded by the National Science Foundation, the U.S. Geological Survey, the Carnegie Corporation, the JEHT Foundation, and the John Randolph Haynes and Dora Haynes Foundation.

Mullin’s appointment completes the Luskin Center for Innovation’s leadership transition following the departure of JR DeShazo, the founding faculty director, who was appointed dean of the LBJ School of Public Affairs at the University of Texas in 2021.

As the faculty director of the center, Mullin will join the existing executive team with Pierce, V. Kelly Turner and Colleen Callahan. Pierce and Callahan will continue serving in executive leadership roles, and Turner will take on a new leadership role furthering her research on climate action.