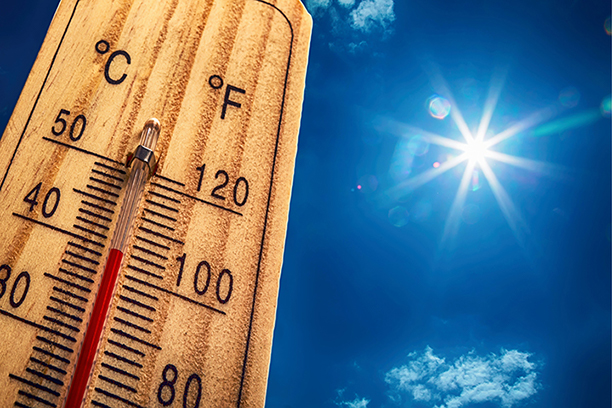 Climate adaptation is an urgent policy priority. As local, state, and national governments confront the reality of a rapidly changing climate, they face the challenge of designing policies to create resilient communities.

The initiative focuses on research that can deliver data-driven insights in a rapidly evolving policy landscape. Current research includes assessments of heat-related risks faced by workers, low-income households, students, and expecting mothers. The research is linked through themes of:

Unequal Learning in a Warming World

This research quantifies how cumulative heat exposure affects learning. Without air conditioning, a 1°F hotter school year reduces student learning by 1 percent. The researchers also identify how school air conditioning can mitigate this effect, and that low-income and minorities students have less access to adequate air conditioning, contributing to the racial achievement gap.

This research garnered over 100 media stories including: an op-ed in USA Today, and coverage by PBS News, The Washington Post, TalkPoverty, KPCC Radio, ClimateWire, and America Adapts, among many other major outlets.

This study provides the first estimates of the impact of hot temperatures on high-stakes exam performance and subsequent educational attainments. Hot days reduce performance by up to 15 percent and have persistent effects on high school graduate status, despite what appears to be compensatory responses by teachers.

Will We Adapt? Temperature, Labor and Adaptation to Climate Change

This study explores heat-related labor impacts to understand the role of adaptation in response to climate change. This research is partially funded by the California Strategic Growth Council as part of its new Climate Change Research Program.

For more information, see the Climate Adaptation and Equity Initiative, led by R. Jisung Park. This initiative seeks to understand of how climate change can affect vulnerable populations – including low-income households and workers exposed to climate-related occupational hazards – and inform actions to increase community-driven resiliency.

The Impact of High Temperatures on Delivery Timing and Gestational Lengths

This study links early childbirths to hotter temperatures due to climate change. Published in the journal Nature Climate Change, the study also received press coverage by CNN, TIME, The Conversation and USA Today, among others.

In this study, researchers estimated the effects of temperature shocks on birth rates in the United States between 1931 and 2010. They found that global warming is making it more difficult for couples to conceive. Specifically, days with a mean temperature above 80 °F cause a large decline in birth rates eight to ten months later.

This study was published in the journal Demography as well as widely cited by the media, including CNN, Reuters, CityLab, and more.

Adapting to Climate Change: The Remarkable Decline in the US Temperature-Mortality Relationship Over the Twentieth Century

Alan Barreca and colleagues examined the temperature-mortality relationship over the course of the 20th century. They found that the mortality impact of days exceeding 80°F declined by 75 percent, that almost the entire decline occurred after 1960, and that this is explained by the diffusion of air conditioning.

The study was published in the Journal of Political Economy and also received coverage in popular media including The Washington Post.

This study focuses on the intersection of subsidized housing and wildfire hazards in California. Results show that subsidized housing is less likely than other housing types to be in the wildland-urban interface (WUI) in both metropolitan and nonmetropolitan areas. However, the magnitude of the overlap between vulnerable households and the WUI–which includes households in over 140,000 subsidized units in the WUI—justifies further research and policy action.

A nearly $1.5 million grant from the Strategic Growth Council to the Luskin Center for Innovation supports multiple studies of heat-related climate impacts, the factors that make populations and communities vulnerable, and opportunities to build resilience. Climate change could exacerbate inequalities, and this project will result in tools to empower communities and help government agencies target responses.

emPOWER is a Los Angeles county-wide campaign led by Liberty Hill which funded 8 grassroots community-based organizations to connect low-income residents to a suite of clean energy, transportation, and financial assistance programs. We completed the assessment to evaluate the effects of the first year of this pilot program. Results showed that the campaign was highly successful in reaching the most impoverished and environmentally disadvantaged communities in the county, especially compared to outreach by individual existing programs. Baseline estimates of “realizable” benefits that could be accessed by emPOWER participants suggest that if even one-third of eligible individuals sign up for a small subset of ongoing bill assistance programs and remain enrolled for five years, $1.2 million in benefits could be gained by these low-income residents. The effectiveness of the emPOWER campaign as documented by this evaluation has contributed to ongoing discussions around expanding this campaign model to other counties in Southern California, and potentially statewide.

Equity Impacts of Urban Land Use Planning for Climate Adaptation

LCI scholar Kian Goh and colleagues assess how the growing number climate of adaptation plans developed by cities affect the vulnerability of the urban poor. The paper, published by the Journal of Planning Education and Research, explains that land use planning for climate adaptation can exacerbate socio-spatial inequalities across diverse developmental and environmental conditions, and offer recommendations to advance equitable adaptation.

In this paper published by Nature Climate Change, LCI scholar Kian Goh and colleagues present a roadmap to reorient urban climate adaptation around issues of equity and justice. Recommendations include: (1) broadening participation in adaptation planning; (2) expanding adaptation to rapidly growing cities and those with low financial or institutional capacity; (3) adopting a multilevel and multi-scalar approach to adaptation planning; and (4) integrating justice into infrastructure and urban design processes.

Forthcoming publications from Dr. Goh include articles on global-urban networks of climate change adaptation in Urban Studies and the politics of urban flooding in the International Journal of Urban and Regional Research.

Land Use and Urban Design

This study collected the first field temperature measurements of solar reflective pavement. It found that surface temperatures decreased as expected, but Mean Radiant Temperature (MRT, a proxy for human thermal comfort) increases midday. It forefronts the importance of planning context when siting cooling interventions. It was awarded best paper of 2020 by the Climate Specialty Group of the Association of American Geographers.

Retreat: Moving to Higher Ground in a Climate-Changed City

LCI scholar Liz Koslov’s book Retreat: Moving to Higher Ground in a Climate-Changed City is an ethnographic account of community-organized retreat from the coast in New York City after Hurricane Sandy. The book, under advance contract with the University of Chicago Press, highlights Dr. Koslov’s examination of the social impacts of buyouts, a form of property acquisition in which houses and lots are purchased from willing sellers with future development prohibited.

See the related article The Case for Retreat in Public Culture as well as the Toolbox: Planning Relocations to Protect People from Disasters and Environmental Change.

Dr. Koslov has spoken about this research in outlets that include The New Yorker, WWNO New Orleans Public Radio, and Scientific American.