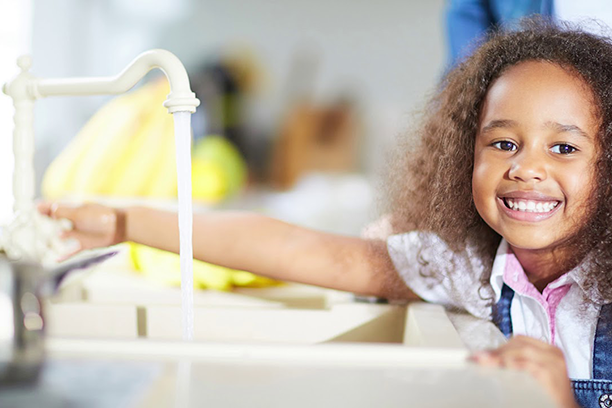 California is the only state in the nation to legally recognize a Human Right to Water, per Assembly Bill (AB) 685, which became law in 2012. Specifically, the state recognizes that “every human being has the right to safe, clean, affordable, and accessible water adequate for human consumption, cooking, and sanitary purposes.” But this right is not yet a reality in all communities, particularly in disadvantaged areas that receive water from small community water systems with limited capacities.

Community water systems — the foundation of California’s water supply network — are responsible for providing customers with a reliable supply of clean water at an affordable price. They are also on the front lines of adapting to drought and climate change, and serve as the portals through which federal, state, and regional officials implement water policies supporting water supply reliability, conservation, efficiency, affordability, environmental protection, and public health.

The Luskin Center for Innovation (LCI) is working with government and civic partners to help achieve those objectives across community water systems and thus fully realize the human right to water for all. Examples follow.

In 2015, California legislators and former Governor Edmund Brown approved AB 401, which calls for the establishment of a statewide Low-Income Rate Assistance Program. It also authorizes the California State Water Resources Control Board (Water Board) to conduct a study to develop implementable program design options. The Water Board commissioned LCI to provide the core research to support the AB 401 study.

LCI researchers estimate that, if left to their current resources, only a little more than 20 percent of water systems would be able to operate their own affordability programs. The researchers also used data on rising water rates and stagnating incomes in California to demonstrate the need for household-level water rate assistance across the state. Researchers modeled a range of feasible affordability program scenarios and detailing multiple options for financing and administering a statewide program.

In a study published in the journal Environmental Justice, co-authors Gregory Pierce and Silvia Gonzalez looked at drinking water access and quality in mobile home parks, a significant but often-overlooked segment of the California population. The study found that mobile home parks are:

As an institutional response, water system regulators increasingly are looking at consolidation of these failing systems with nearby systems that have better water quality and greater capacity. In 2015, the California state legislature authorized the Water Board, via Senate Bill 88, to facilitate the consolidation of severely under-performing water systems. Despite the clear benefits, a statutory directive, and financial incentives, many small, disadvantaged communities need additional support and inducements. Consequently, this study identified and explained the often poorly understood policies that California counties may adopt to encourage small system consolidation. Policy tools evaluated include general plan guidance, the roles of local agency formation commissions, and the roles of county boards of supervisors.

A policy brief by LCI highlights substantial disparities in the cost of water to customers within Los Angeles County. During 2014-2015, researchers collected cost data from 115 community water systems, about half of all in the county, and found that there is as much as a $2,000 difference in the average annual cost of water to households, depending on community water system provider. The systems range from large municipal utilities, such as the Los Angeles Department of Water and Power, with nearly four million customers, to small private water systems serving mobile home parks and remote communities that total as few as 25 customers.

The policy brief outlines potential explanations for the price differences and feasible policy responses to reduce cost inequalities in the Los Angeles region.

Despite the essential role water plays in Los Angeles County, surprisingly little is known about our community water systems. Few people know that L.A. County has over 200 community water systems that vary dramatically in size, geography, the types of communities they serve, and technical, managerial, and financial capacities. Each community water system has adopted one of eight governance structures, which are covered by five distinct bodies of state law. Adding to this complexity, smaller water systems are often exempted from statewide water conservation and consumption reporting regulations. As a result, federal and state oversight and knowledge of these community water systems is fragmented and often limited.

LCI’s Water Atlas and Policy Guide seeks to improve policymakers’ understanding of community water systems within L.A. County and to provide a data resource for future research. All data used in the analysis can be downloaded from this page. A partial list of the analyses contained in the atlas include:

Mistrust of tap water by residents is greater in Los Angeles County than in most of the U.S. Part of the reason is that there are well-documented accounts of discolored, foul-smelling and poor-tasting water coming from taps in some communities ─ largely low-income communities of color across the county ─ served by publicly-regulated drinking water systems.

To address both real and perceived risks, in 2018 LCI convened more than 100 community members and other stakeholders to discuss challenges and actionable next steps necessary to monitor, improve, and increase trust in tap water quality in the L.A. region for a more equitable and sustainable water future. The discussion, At the Tap, was made possible by support from the Water Foundation and the leadership of the Environmental Justice Coalition for Water, Environmental Justice Center for Water, Environment Now, LCI, and these units at UCLA: the Center for Neighborhood Knowledge, Sustainable LA Grand Challenges, the Water Technology Resource Center, and the Water Faculty Group.

As a next step, LCI launched a working group to develop policy solutions to address drinking water contamination and mistrust due to premise plumbing, i.e., pipes that run from the lot line of a property to the tap and which are the responsibility of property owners. With participants from water systems, state agencies, the county, and nonprofit groups, the working group plans to identify (a) the legal authorities of tenants and regulators to intervene in cases of premise plumbing contamination, and (b) financing program models targeted toward landlords to incentivize them to upgrade their premise plumbing infrastructure.

U.S. Households’ Perception of Drinking Water as Unsafe and its Consequences: Examining Alternative Choices to the Tap

The researchers estimated the minimum annual expenditure by all U.S. households who perceive the tap as unsafe and buy bottled water to meet necessary consumption standards at $5.65 billion annually. Novel secondary treatment interventions and education campaigns are needed to address the perception of tap water as unsafe and consequent alternative source reliance, while additional research is needed to document the active trade‐offs households make to manage their water sources, and to better understand determinants of the perception of tap water as unsafe within minority groups.

Mistrust at the Tap? Factors Contributing to Public Drinking Water (Mis)perception across US Households