When rain falls on roofs, streets, and other paved areas, the water cannot soak into the ground and instead drains through gutters, storm sewers, and other engineered systems into nearby water bodies. That runoff carries trash, bacteria, and other pollutants. When rain falls in natural areas, soil and plants absorb the water and filter the pollution. Green infrastructure uses vegetation, soils, and other elements to protect, restore, or mimic the natural water cycle in order to manage stormwater and create healthier urban environments. Green infrastructure elements, such as rain gardens and permeable pavement, can be integrated into small sites all the way to large-scale elements spanning entire watersheds.

The Luskin Center for Innovation (LCI) conducts analyses and creates guides that support the expansion of green infrastructure into more communities to enhance public benefits. 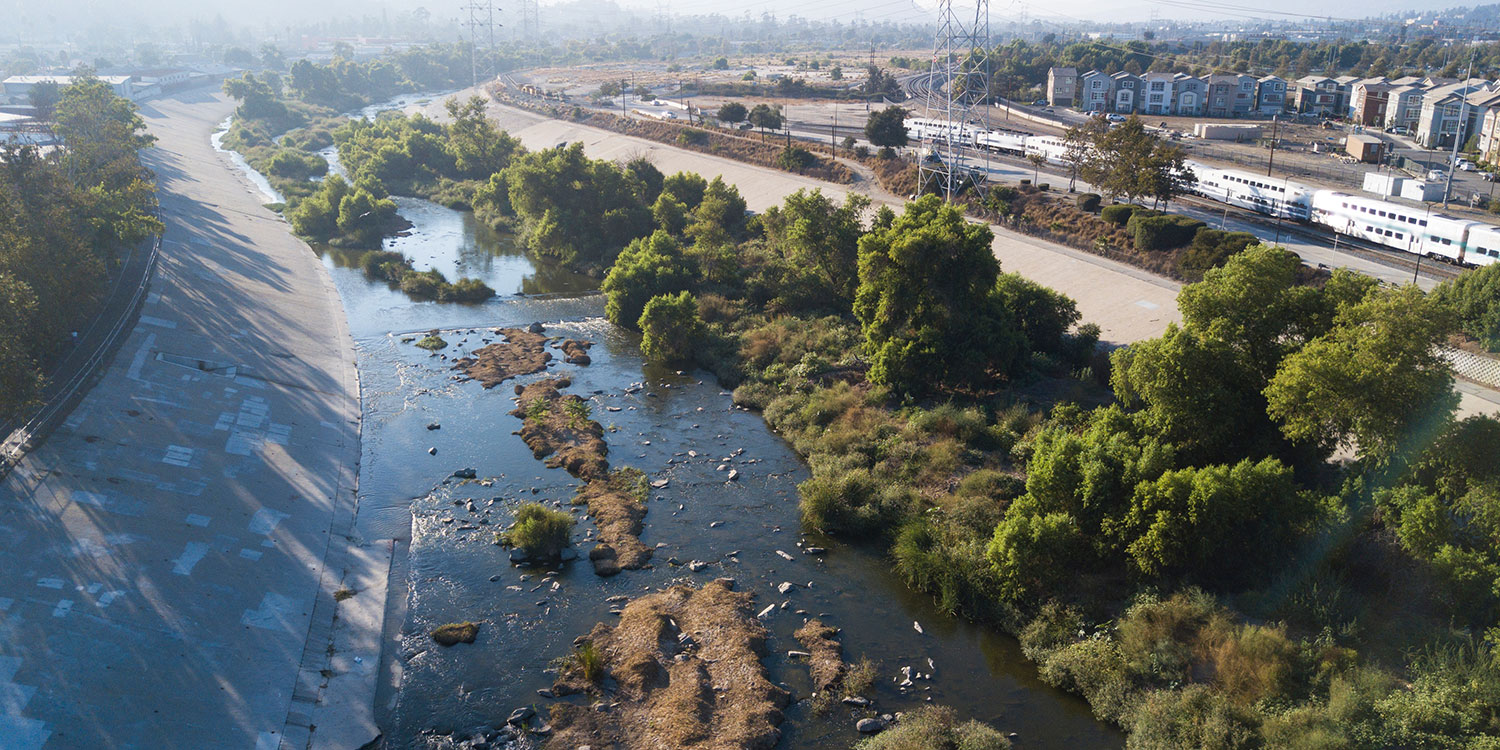 Managing stormwater is an important task for cities, and some methods to do so are “greener” than others. This study examines how local water professionals choose among different stormwater management options. In particular, what leads them to prioritize green infrastructure stormwater management options that provide wider benefits to ecosystems and society (such as rain gardens)? This survey of stormwater professionals from Cleveland and Denver revealed two patterns. First, water managers’ top priorities align with federal requirements for their cities. Second, managers’ other priorities align with their personal values. The upshot: the local leaders who most value the environment are most likely to choose “green” stormwater options that further urban greening goals.

Integrating green infrastructure into streetscapes and other urban environments may seem like no brainer in order to realize a range of environmental benefits. But the considerations are many for city decision-makers.

Through the STORMS project, we are examining how stormwater management decisions are made with respect to formal laws and policy and organizational norms. The STORMS project engages a multi-disciplinary team of researchers from UCLA, Kent State University, and Colorado State University using both social and physical science methods. One method involves surveying stormwater managers and stakeholders in the Cleveland and Denver regions. By better understanding decision-making processes around green infrastructure implementation and performing policy comparisons, the ultimate objective is to assess the impact of stormwater decision-making on environmental outcomes in urbanizing regions.

Water-scarce urban areas in California miss out on billions of gallons of fresh water each year as rain washes into storm drains and out to sea. A nearly $2 million grant-funded project seeks to transform University of California campuses into living laboratories that show how urban stormwater can safely augment water supplies and minimize flood risk. Through coordinated research, modeling, and engagement with university officials and regulatory agencies, the research team will develop the science, engineering, and policy innovations needed to usher in a new era of treating stormwater as a resource rather than a liability.

Gregory Pierce, associate director of research for LCI, is part of a research team comprising faculty, staff, and students from all five southern University of California (UC) campuses that received the grant from UC’s Multi-campus Research Programs and Initiatives. Their role on the larger team is to examine how universities compare to cities in terms of governance and financial capacity to invest in green infrastructure, and how to overcome barriers in capacity to enhance stormwater capture more broadly in the region. The work has included a comparative analysis of how various cities are approaching stormwater capture and management, and why.

Creating a Complete Los Angeles River Greenway for All

For an example of what communities can do with land that adjoins the Los Angeles River, look no further than Marsh Park — 3.9 acres of greenway in the Elysian Valley neighborhood of Los Angeles, not far from downtown. The park features trees, green infrastructure, play and fitness equipment, a walking path, picnic tables and an open-air pavilion. It is built around a large industrial building that houses a company that takes modular shipping containers and turns them into residences for the homeless. The park also serves as a gateway to the L.A. River and is one of the case studies featured in the Los Angeles River Greenway Guide.

The guide describes the experience of community residents and other leaders who have successfully developed portions of the L.A. River greenway, and provides advice to those interested in promoting a continuous greenway in their community. It features 14 case studies of small and large projects that have improved community access to the L.A. River and/or created parks, pathways, or bridges along it. The guide also includes considerations for how to:

UCLA researchers developed the guide based on a collaborative process that involved dozens of interviews and several community events. The project was supported by The Rosalinde and Arthur Gilbert Foundation, the David Bohnett Foundation, and the California Endowment.

Researchers used data accumulated from 2009 until 2015, during which time the City of Los Angeles spent more than $42 million on the turf replacement program. In partnership with the Metropolitan Water District they issued rebates for 15 million square feet of turf, saving approximately 66,000 gallons of water a year. To assess the economics of lawn replacement from the household perspective, the report measures the impact of different rebate levels, turf replacement costs, climate zones, and future expected water pricing on household financial benefits. Rebates of $1.75 result in a payback period for typical households and ratepayers of approximately 10 years, comparable to other investments such as solar. The report also calculates the payback periods for ratepayers based on varying levels of household participation in the turf replacement program and different levels of rebates.

The reuse of graywater has emerged as an important sector in water reuse, especially in arid regions. Defined as domestic wastewater not originated from toilets (e.g., generated by households’ hand-washing sinks, showers, bathtubs, and washing machines), graywater can often be reused onsite without treatment for subsurface irrigation while aboveground water reuse often is allowed only when treatment is provided.

In a related study also involving LCI, researchers performed a cost-benefit analysis of onsite graywater recycling in single- and multi-family residences, using Los Angeles as a case study. The authors compared a low-cost, wetland treatment system with a high-cost commercial treatment system in order to evaluate cost savings. The researchers found that commercial treatment options may be economically feasible only for multi-family dwellings with high water consumption. For single-family residences, a wetland treatment system was found to be cost-effective based on the amount of nonpotable water generally consumed by these households.

Alleys are largely underutilized and understudied. Cities across the U.S. are realizing the potential for alleys to operate as more than single-function spaces for vehicle use. As such, cities are increasingly transforming alleyways into multipurpose community assets. This report provides practical information for city staff, community members, and other stakeholders interested in supporting green alley efforts. Green alleys take many different forms — ranging from one-day community events to permanent pedestrian corridors. Infrastructure elements common to most green alleys include permeable paving, vegetation, and other stormwater management techniques.

The report introduces a green alley framework and provides example of completed alley transformations from across the U.S. Then it provides a more in-depth case study of the current Avalon Green Alley Network Demonstration Project in park-poor South Los Angeles. The report provides ideas and lessons for green alley design, funding, partnership development, community engagement, and the navigation of a complex regulatory environment. The challenges and solutions presented in this document can be transferable to communities nationwide.

The Model Design Manual for Living Streets — honored by the American Planning Association — is a collaborative effort by national experts in living streets concepts. The book was funded by LCI and the Department of Health and Human Services through the Los Angeles County Department of Public Health. The manual focuses on all users and seeks to achieve balanced street design that can accommodate cars while ensuring that pedestrians, cyclists, and transit users can travel safely and comfortably. It also incorporates features to make streets lively, beautiful, economically vibrant, and environmentally sustainable.

This model manual offers a template for local municipalities and jurisdictions, especially those with limited resources, and provides the ability to tailor manuals to meet specific needs. It includes recommendations for how to maximize benefits and minimize costs associated with street design.