When nearly 200 counties adopted the United Nation’s 2030 Agenda for Sustainable Development, they pledged to ensure availability and sustainable management of water and sanitation for all. This goal (referred to as Sustainable Development Goal 6 of 17 SDGs) is not yet a reality for millions around the world. This includes some communities in California, the only U.S. state to legally recognize a Human Right to Water, per Assembly Bill 685, which became law in 2012.

Specifically, California recognizes that “every human being has the right to safe, clean, affordable, and accessible water adequate for human consumption, cooking, and sanitary purposes.” Community water systems — the foundation of California’s water supply network — are responsible for providing customers with a reliable supply of clean water at an affordable price. They are also on the front lines of adapting to drought and climate change, and serve as the portals through which federal, state, and regional officials implement water policies supporting water supply reliability, conservation, efficiency, affordability, environmental protection, and public health.

The Luskin Center for Innovation (LCI) is working with government and civic partners to help achieve those objectives across community water systems and thus fully realize the human right to water for all. 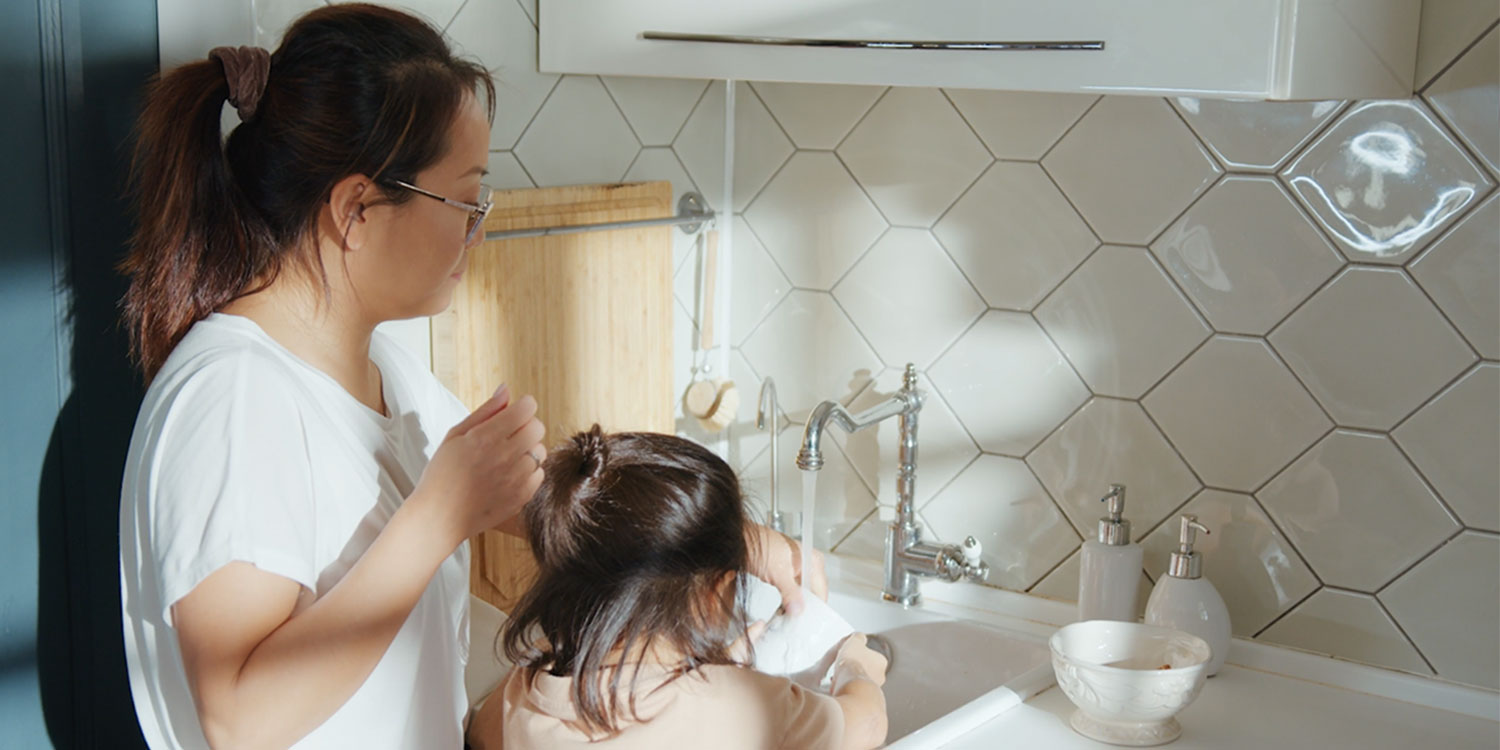 L.A. County’s Community Water Systems (CWSs) shape access to and management of safe, reliable, and affordable water. But how well do their governing bodies represent the residents they serve? This report develops a comprehensive understanding of the leadership of L.A. county’s water systems to inform, equip, and empower residents of the system served and stakeholders in the governance conversation. The report finds that women and Latinx communities are underrepresented in decision-making; that governing body members have low turnover, and elections are an important accountability mechanism; that compensation varies widely by role and responsibility; and that broader public access to information and engagement are needed.

This study published by the California State Water Board and supported by UCLA research identifies a risk for failure among a significant portion of the state’s small and medium-sized public water systems. The report is the first comprehensive analysis of how clean water is provided in California, and it estimates how much it would actually cost to deliver safe water to every resident.

Of the 2,779 public water systems evaluated in the study, nearly half are at some risk of failing to provide an adequate supply of safe drinking water. To measure the health of water systems, the researchers assessed each water system using 19 indicators for water quality, accessibility, affordability and operational capacity. Learn more.

A survey by the California State Water Resources Board, which was supported by research from the UCLA Luskin Center for Innovation, shows the extent of water bill debt accumulation during the COVID-19 pandemic. Households owe a combined $1 billion in unpaid bills, which has increased substantially since the pandemic.

The report finds that roughly 12 percent of Californians have overdue payments on their water bills. The average debt amounts to $500, but about 155,000 households owe more than $1,000 in unpaid bills.

The data illuminates racial inequalities in access to affordable drinking water. Households in Black and Latinx neighborhoods are more likely to have unpaid bills, and have disproportionately higher amounts of debt. These racial disparities exist even after adjusting for income and housing.

Disadvantaged communities concentrated in southern Los Angeles County lack fair options when it comes to water supply. When served by public utilities, aging infrastructure, water quality problems, and other complications can translate into sacrifices in quality or reliability. When supplied by investor-owned utilities, they receive reliable water supply but pay more than affluent communities.

This report examines the case study of Sativa County Water District, a cautionary tale of a failed water system in southern LA County. It then analyzes the 29 existing disadvantaged water systems and makes recommendations regarding possibilities for consolidation and other solutions to bring more water equity to California’s water supply.

LCI helped develop and inform recommendations for report by the California State Water Resources Board aimed at establishing a statewide low-income rate assistance program for water. The report was requested by the California State Legislature via AB 401, which passed in 2015 and calls for the establishment of a statewide Low-Income Rate Assistance Program. The Water Board commissioned LCI to provide the core research to support the AB 401 study. To date, no state nor the federal government has developed or administered a water rate assistance program, and thus California’s work is groundbreaking.

LCI researchers gathered and analyzed data on water rates, household incomes, and other low-income assistance programs to create the first statewide picture of California’s water affordability challenges. Recommended in the report is a three-part strategy to comprehensively address water affordability for low-income Californians, including those who pay indirectly through rent. These recommendations are: a direct water bill credit, a renter’s water credit, and water crisis assistance.

Evaluating the Performance of Water Systems in L.A. County

A study by LCI found significant disparities in the quality, affordability and accessibility of water across Los Angeles County. However, the number of health-related water-quality violations in the county is quite low compared to other parts of Southern California, the researchers concluded.

The study evaluated the performance of the more than 200 water systems in L.A. County and compared current data to findings published in LCI’s 2015 water atlas. The new progress report gives systems operators, regulators and residents the most current and comprehensive picture of water system performance, in order to identify what systems are in need of intervention

The United Nation’s 2030 Agenda for Sustainable Development is ambitious and inclusive, but how well are these global aspirations likely to result in implementable policy change for water and sanitation? This article assesses governance challenges at the local level associated with Sustainable Development Goal (SDG) 6, which pledges to ensure sustainable water and sanitation for all. The majority of developing countries manage services at the subnational level, making the quality of local governance the key ingredient for improvements in the sector. This article first reviews prior shortcomings in global monitoring efforts and how SDG 6 was formulated to address them. The analysis then examines local governance challenges facing SDG 6 and potential barriers to implementation. These barriers manifest as both contradictions within SDG 6 itself as well as contradictions between SDG 6 and the Sustainable Development Agenda more broadly. As SDG monitoring rubrics undergo further reformulations, it may be necessary to prioritize between goals and targets, or otherwise stagger the timing of their promotion and implementation.

This study, published in the journal Environmental Justice, looks at drinking water access and quality in mobile home parks, a significant but often-overlooked segment of the California population. The study found that mobile home parks are:

As an institutional response, water system regulators increasingly are looking at consolidation of these failing systems with nearby systems that have better water quality and greater capacity. In 2015, the California state legislature authorized the State Water Resources Control Board, via Senate Bill 88, to facilitate the consolidation of severely underperforming water systems. Despite the clear benefits, a statutory directive, and financial incentives, many small, disadvantaged communities need additional support and inducements. Consequently, this study identified and explained the often poorly understood policies that California counties may adopt to encourage small system consolidation. Policy tools evaluated include general plan guidance, the roles of local agency formation commissions, and the roles of county boards of supervisors.

A policy brief by LCI highlights substantial disparities in the cost of water to customers within Los Angeles County. During 2014-2015, researchers collected cost data from 115 community water systems, about half of all in the county, and found that there is as much as a $2,000 difference in the average annual cost of water to households, depending on community water system provider. The systems range from large municipal utilities, such as the Los Angeles Department of Water and Power, with nearly four million customers, to small private water systems serving mobile home parks and remote communities that total as few as 25 customers.

The policy brief outlines potential explanations for the price differences and feasible policy responses to reduce cost inequalities in the Los Angeles region.

Despite the essential role water plays in Los Angeles County, surprisingly little is known about our community water systems. Few people know that L.A. County has over 200 community water systems that vary dramatically in size, geography, the types of communities they serve, and technical, managerial, and financial capacities. Each community water system has adopted one of eight governance structures, which are covered by five distinct bodies of state law. Adding to this complexity, smaller water systems are often exempted from statewide water conservation and consumption reporting regulations. As a result, federal and state oversight and knowledge of these community water systems is fragmented and often limited.

LCI’s Water Atlas and Policy Guide seeks to improve policymakers’ understanding of community water systems within L.A. County and to provide a data resource for future research. All data used in the analysis can be downloaded from this page. A partial list of the analyses contained in the atlas include: