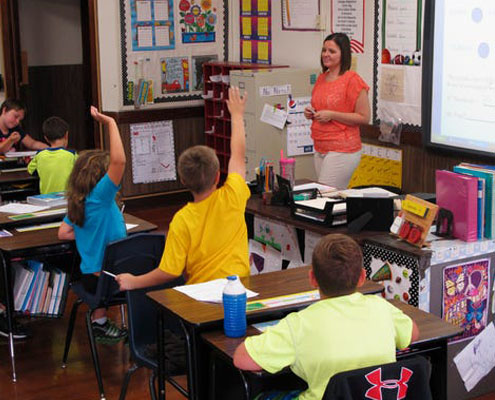 Millions of American kids are preparing to go back to school during a time of record-breaking heat. For many of them – particularly for racial minorities living in low-income neighborhoods – this means trying to learn in sweltering classrooms with little or no air conditioning.

In a USA Today op-ed, R. Jisung Park, associate director of economic research at the UCLA Luskin Center for Innovation, writes about unequal learning in a warming world. His paper, forthcoming in the American Economic Journal: Economic Policy, finds that extreme heat and a lack of air conditioning in classrooms contribute to the racial education achievement gap between black and Hispanic students on one hand and white students on the other. It is the first peer-reviewed paper to put dollar figures on the costs and social benefits of air conditioning in schools.

Using data from over 12,000 schools and 10 million middle- and high-school students across America, Park and his colleagues found that students who experience more hot days during the school year perform worse on subsequent standardized exams. They quantified that a 1-degree-hotter-than-average academic year reduces learning by about 1%. Climate change will likely make matters worse.

Park, who also teaches public policy in the UCLA Luskin School of Public Affairs, points to a solution: air conditioning in schools, especially if powered by clean energy that does not contribute to climate change.

“We must stop thinking about climate mitigation and climate adaptation as an either-or proposition. We need to do both,” states Park.

His research estimates that cooling schools could be a particularly cost-effective method of narrowing the education achievement gap. In hot places such as Houston and Atlanta, each additional year of sufficient school air conditioning could boost collective future earnings by up to $2 million in any given high school of 1,000 students.

“We must recognize that adapting to climate change is a matter of racial and economic justice, especially in schools. Whether through the “Green New Deal,” federal infrastructure policy or other initiatives, keeping students cool could be a cost-effective way to boost climate resiliency, promote learning and economic mobility, and narrow the gap,” states Professor Park.

For additional highlights from the study, see the briefing paper Unequal Learning in a Warming World.