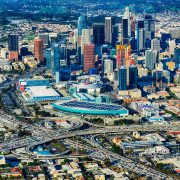 The UCLA Luskin Center for Innovation has released a report identifying successes and challenges of the program. It also provides recommendations for implementation of the recently approved expansion. Researchers conclude that this FiT program is bringing environmental and economic benefits to residents and property owners in Los Angeles.

“We estimate that the program’s first 150 MW of solar installations will support 900 local jobs,” said Julien Gattaciecca, co-author of the report. “We also calculate that these projects will result in $27.4 million in LADWP ratepayer savings, due to the utility’s avoided spending on grid upgrades, fuel costs, carbon allowance purchases, and more. Importantly, the program will avoid 68,500 metric tons of carbon dioxide each year, in addition to reducing emissions of other air pollutants, ” Gattaciecca added.

The initial program received more bids than total capacity offered, and is now oversubscribed. But not all projects have been constructed yet.

Researchers interviewed solar developers, property owners, and others who participated in the FiT program. Most participants had positive feedback on the program, but some also identified challenges related to securing project sites, long project timelines, and costs related to connecting some installations to the grid.

To address the issues identified, the UCLA report provides recommendations to support program expansion while improving cost-efficiency and the social equity effects of the program. For example, innovative project sites ─ such as carports, brownfields, oil fields, and reservoirs ─ were identified as underutilized locations that could be used to produce renewable electricity. In addition, LADWP could also work in close collaboration with non-profits to increase the number of project sites that would benefit low-income households living in disadvantaged communities.

Researchers also suggest that LADWP could decrease the base rate offered to participants, especially for large installations. Based on the experience of other utilities in California, FiT programs can remain attractive even at lower rates. The report also recommends using more complex rate designs to support innovative projects and installations that would deliver power when most needed.

Now exists an opportunity to update the FiT program to best support the City’s ambitious goals, including a renewable energy target of 55% by 2025. LADWP will need renewable energy generated both locally and out of basin to meet its needs. These objectives are supported by falling costs of solar panels and battery storage. LADWP has the attention of innovative and capable solar developers, and could now update its FiT program to maximize benefits to LADWP and its customers.

This report is part of a series of reports by the UCLA Luskin Center for Innovation, in collaboration with the Los Angeles Business Council Institute, that shaped the design and continue to inform implementation of LADWP’s FiT program. To see other reports in this series, see the last section on this page.