Massive mural in South L.A. is painted with a surface-cooling coating to start a conversation about our warming world

The gigantic mural at the corner of Avalon and 62nd in South L.A. is super cool. The face of the Greek god Zeus painted in electric blues is attention grabbing for those who walk by on the sidewalk and pass by on the street. At 72 feet wide and 27 feet high, the street art makes a big, bold statement in a neighborhood of warehouses and loading docks.

It also literally cools down the brick wall it’s painted on.

Created with a solar reflective coating that reduces surface temperatures up to 30 percent, the so-called eco-mural aims to tap into the popularity of street art to start a conversation about climate change, said V. Kelly Turner, assistant professor of urban planning at the UCLA Luskin School of Public Affairs and affiliated faculty at the Luskin Center for Innovation. 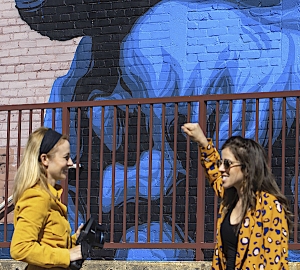 Turner conducts research on urban design and the environment, including the effectiveness of cooling surface paint to combat the “urban heat island effect” that drives up temperatures in cities. She does extensive work with the city of Los Angeles, which is testing the reflective coating on streets in every council district.

“L.A. has the first-of-its-kind cool pavement project. And we’re also a vanguard for supporting the street arts,” Turner said. “But no one’s ever done a street art intervention or mural using cool paint.”

To make that vision a reality, Turner reached out to street art advocate Lizy Dastin, who teaches art history at Santa Monica College. Dastin recruited muralist Eric Skotnes from the activist art collective Indecline, whose work blending graffiti art and classical figures has been commissioned on spaces across the United States and as far away as Israel and Peru.

By the time the mural Turner envisioned was unveiled — on an October day when temperatures in Los Angeles hit 95 degrees — the list of collaborators included artists, urban planners, climate scholars, community activists and entrepreneurs. But as Skotnes put the finishing touches on the towering face of Zeus, the excitement was tempered by the gravity of the underlying issue.

Turner cited research showing that extreme heat leads to more deaths than all other weather-related hazards combined. The danger is especially acute in cities, where buildings, roads and parking lots trap heat during the day and hold on to it into the evening, making afternoons and nighttime temperatures unnaturally hot.

In Southern California, cities often run 9 degrees Fahrenheit hotter than the undeveloped regions that surround them. By 2021, as climate change intensifies, Los Angeles could experience an additional 60 to 90 days of temperatures above 95 degrees every year, UCLA research shows.

To help the city gauge the effectiveness of the cool pavement strategy, Turner travels across the region to collect field data on the reflective paint. She has attached 100 tiny sensors to key fobs and placed them in trees in Ontario, Watts and Fresno. Along with collaborator Ariane Middel of Arizona State University, she has accompanied a temperature-sensing robot named MaRTy as it trundled down the sidewalks of Pacoima and Ontario to measure how the average pedestrian would feel the heat.

While other studies have focused on surface temperatures, the research by Turner and Middel is the first to determine the cool pavement sites’ “mean radiant temperature,” a more accurate predictor of thermal comfort for humans. The suite of measurements includes surface and air temperature, long- and short-wave radiation, wind speed and humidity.

The two researchers found that cool pavement surface temperature is lower than untreated asphalt at all hours, but mean radiant temperature can be almost 7 degrees Fahrenheit higher in the afternoon. Turner noted, “Cool pavement is not a panacea but one tool of many in making climate-adapted cities that are less hot.”

It’s all part of what she calls a “fantastic urban experiment.”

“Anytime a city does something like this — green interventions, let’s call them — as scholars, it’s incumbent on us to evaluate them using the tools of science,” she said. “We are really doing what’s called ‘adaptive management’— do, learn from doing and adjust.”

Turner is a social scientist who identifies urban design problems and builds teams to develop answers. That skill was clearly evident in the network she built to make the South L.A. mural a reality.

The idea for the project came in the middle of the night, she recalled. She immediately sent predawn emails to Dastin, a friend from their days at Wellesley College and founder of the street art advocacy venture Art and Seeking, as well as research partner Middel, who conducts climate studies as director of the SHADE Lab at Arizona State.

Armed with a thermal camera, Middel captured the heat signature of the finished mural, swirls of yellow, orange and purple that showed the effects of the cooling paint.

“That’s the most exciting part. The art exists in the visual spectrum and the infrared,” Turner said. “It’s interesting from an artistic perspective because it’s a different artistic parameter, a challenge for the artist.”

Muralist Skotnes developed the Zeus concept in tribute to the building owner, Amped Kitchens, whose logo includes a lightning bolt — the god of sky and thunder’s weapon of choice. The building houses a community of Los Angeles food makers who rent state-of-the-art production, packaging and storage facilities. Owners Mott Smith, a UCLA alumnus, and Brian Albert are advocates of sustainable urbanism and eagerly offered their 1920s-era building as a canvas for the mural.

The solar reflective coating was donated by Creative Paving Solutions of Arizona, and the project was underwritten by UCLA’s Luskin Center for Innovation and the nonprofit Mural Conservancy of Los Angeles.

Turner sees the mural as an eye-catching way to raise public awareness about the urgent need to adapt to a warming world. But she says her end goal is to offer practical, data-based solutions for cities like Los Angeles.

“As a human environment geographer,” Turner said, “my passion is trying to think through how to make this research more useful for a city planner who needs to figure out, ‘OK, I’ve got this intersection, how can I make it cooler for people waiting for the bus?’ ”

This project received support from the UCLA Luskin Center for Innovation.

The “cool art” mural as seen in infrared, left, and to the naked eye. Photos by Ariane Middel

Despite Federal Inaction, 100% Clean Energy is Becoming Reality Across the ...
Scroll to top