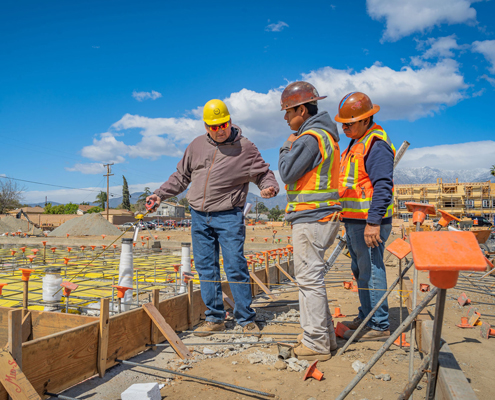 The UCLA Luskin Center for Innovation (LCI) has supported the launch of California’s innovative Transformative Climate Communities Program (TCC), one of the world’s most comprehensive sets of investments in local climate action. This includes developing the evaluation plan to track progress and evaluate outcomes from investments that could serve as a global model for community-scale climate action.

Now, inaugural progress reports for the first communities awarded TCC grants — Fresno, Ontario and Watts in Los Angeles — are authored by LCI researchers. These reports, and other resources related to LCI’s tracking of the groundbreaking efforts in local climate action, are centralized on a new TCC resource page. Policymakers, community stakeholders, researchers, and others interested in local strategies to combat climate change can use this page to monitor progress, best practices, and lessons learned over the five-year TCC grant implementation period that began in the spring of 2019.

The program to fund the development and implementation of neighborhood-level transformative plans that include multiple projects to reduce greenhouse gas emissions was authorized by Assembly Bill 2722 in 2016. In addition to fighting climate change, the program empowers disadvantaged communities impacted by poverty and pollution to support projects that advance their local economic, environmental and health goals.

“TCC may be the most holistic investment in neighborhood-scale and community-driven climate action anywhere on the planet,” said Jason Karpman MURP `16, project manager of UCLA’s TCC evaluation. “Lessons learned from this new program could have potentially broad implications for climate action elsewhere.”

The California Strategic Growth Council serves as the lead administrator of TCC and awarded the first round of grants to Fresno ($66.5 million), Ontario ($33.25 million) and the Watts neighborhood of Los Angeles ($33.25 million).

Communities are empowered to customize their projects and plans based on their priorities and partnerships. The program includes mechanisms for accountability, including oversight from community members as well as third-party evaluation from academic researchers.

LCI researchers at UCLA and a similar group from the UC Berkeley Center for Resource Efficient Communities comprise the evaluation team for round 1 of TCC grants. UCLA researchers will take on a fourth TCC site for evaluation, Northeast Valley Los Angeles, during round 2 of TCC implementation.

The evaluation team worked with Fresno, Ontario and Watts stakeholders to create the Transformative Climate Communities Evaluation Plan, which UCLA published in late 2018. This research roadmap is being used to track and assess progress and results over a five-year period in those communities.

“This first set of reports also documents progress on TCC implementation to date, including project milestones and personal stories of how TCC investments are affecting the lives of people who live and work in the pilot communities,” Karpman said. “This includes the voices of resident leaders in Ontario working to implement the site’s community engagement plan, a job trainee in Fresno learning how to install solar panels, and a high school student in Watts helping to expand a community garden.”

The first set of annual reports focus on the period following the initial announcement of the TCC awards in 2018 through June 2019, which includes the first few months of project implementation. Common milestones across the three sites include laying the foundation for grant success, establishing partnerships and a governance structure, and launching new local initiatives around health, economic development and the environment.

UCLA’s page includes a number of other resources. Photos of residents and project staff show them working to bring their communities’ vision to reality. Supplemental methodological documentation such as open source code is available for those seeking to replicate findings. And staff bios show the evaluators involved with the project.

To maximize the benefits of these types of projects, grantees also must develop and implement the following transformative plans:

When Utilities Shut Off Water for the Poor, We Are All at Risk
Scroll to top